A conference on ecosystem monitoring and forest census research in India

Scientists are studying the effects of climate change by measuring tree growth
NCBS-Oxford Meet | A conference on ecosystem monitoring and forest census research in India
﻿Climate change has emerged as the primary ecological challenge of our times. Globally, atmospheric carbon dioxide levels are increasing and temperatures are rising. Against this backdrop, earth’s tropical forests, which take carbon dioxide out of the atmosphere and fix it into the biosphere, are her single largest buffer against runaway global warming. Documenting and predicting the responses of tropical forest ecosystems to changing climates is an urgent and important area of research globally. This workshop and mini-conference held in collaboration with the Ecosystem Laboratory at the University of Oxford and the RAINFOR-GEM census plot network at NCBS brought together forest ecologists working in different tropical regions of the world, including India, in a two-day workshop to discuss a. methodologies for forest dynamics assessments and b. ways in which different groups in India can synergize their efforts with each other and with those across the globe.﻿ 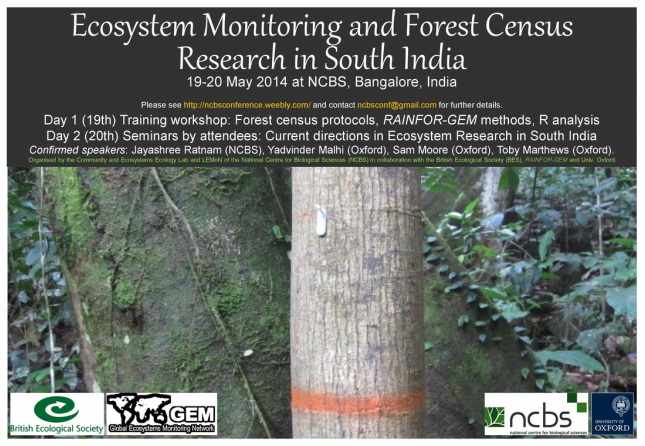 Poster of the NCBS-Oxford Meet
Around sixty participants including students, researchers and eminent scientists from several Indian institutes/organizations, University of Oxford and University of Peradeniya, Sri-Lanka attended the two day workshop-cum-conference. Day one comprised the workshop component during which participants were introduced to several plot establishment and monitoring protocols. On day two participants learnt about current research and future directions in forest dynamics from scientists and students from several esteemed academic institutes and organizations through a series of oral presentations. The entire schedule with abstracts of the talks maybe downloaded below . The conference concluded with an interactive session where ideas on how different groups hitherto working independently in India on forest dynamics could synergize their efforts and work towards a productive collaboration in the future.

NCBS-Oxford meet participants
The meet was made possible through a UGC-UKIERI project grant  received as part of a UGC-UKIERI Thematic Partnership between NCBS and University of Oxford.

A meeting report published in Current Science maybe viewed ﻿﻿﻿﻿below﻿﻿﻿﻿.